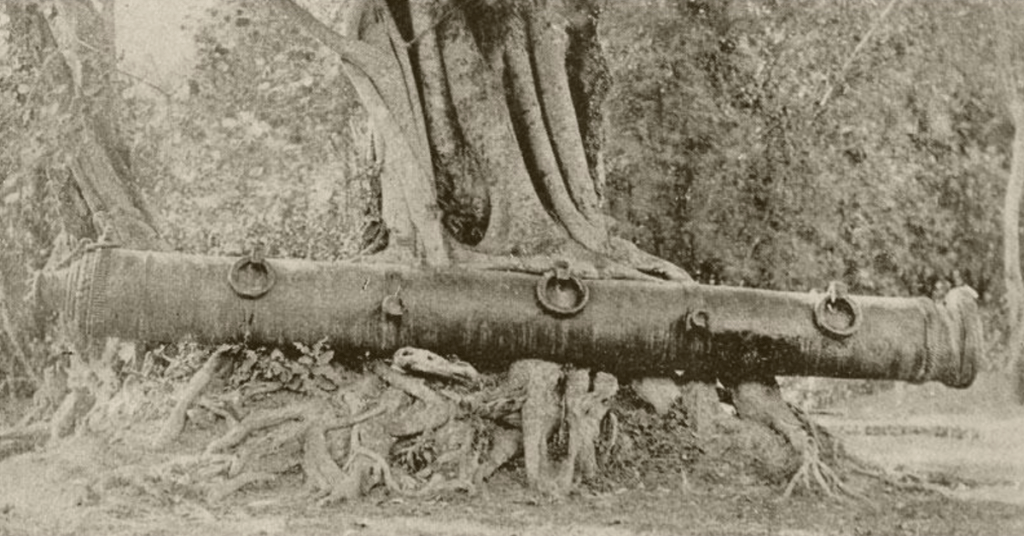 Jahan Kosha Cannon, the means of this destroyer of the world, and shortcut Jahan Kosha.

It is located a quarter of a mile southeast of the Katra Mosque in Murshidabad, West Bengal, India.

Some details of Jahan Kosha

A quarter of a mile southeast of the Katra Mosque is the “Topa Khana”, the site of the Nawab’s Artillery Park, and the eastern entrance to the old capital was protected across the eastern boundary of the city to the east, by Cobra Nala, locally known as Katra Lake.

Here Jahan Kosha is said to have a great gun called the “Destroyer of the World”, which originally rested in a car with wheels and rested and embedded a peepal tree (Ficus religiosa) that grew beside it and held about four feet high.

The soil raises it en masse. The wheels have disappeared. Car and trunk ironworks are still visible.

The cannon is made of a combination of eight metals, such as gold, silver, copper, lead, zinc, mercury, iron, and tin.

It is 17 feet and 6 inches long with a 5-foot cliff at the edge of the touchhole. The diameter of the touch hole is 1 and a half inches, and that of the orifice is 6 inches.

The cannon weighs about 7900 kg and 17 kg of Gunpowder was required for a single shelling.

The gun was made at Dacca during the reign of the Mughal Emperor Shah Jahan when Islam Khan was the Subahdar of Bengal.

It was built by the then-famous Janardhan Karmakar, under the direction of Daroga Sher Mahomed and under the supervision of Hara Vallabh Das in 1637 AD.

The following description of the gun was given in 1847 by Major Showers. “Naturalists and general observers are interested in the position of Jahan Kosha.

It is grasped by two trunks of a peepal tree and supported by them about 18 inches from the ground.

According to the native tradition, it was brought to the spot in a car and the wheels were left there due to sinking in the mud and could not be lifted there.

The tree must have spread beneath it and the trunks held the gun as it grew and continued to support it as the car moved and fell from it.

The back trunnion is embedded in the trunk and cannot be seen; but two stanchions and a ring are visible, which evidently belonged to the carriage.

The front trunnion, with the ironwork attached, was until lately, also embedded in the tree…There is another peculiarity that it may be proper to notice, as exhibiting a second phenomenon in the growth of the tree.

There are two trunks supporting the gun but I am interested to think that these are the branches of a tree.”.

The gun is loaded with nine brass tablets with inscriptions. Major Showers also gave Persian as well as a translation of the inscription. “Lord of the universe; The great Shah Jahan, the imperfect – the second Sahib Kiran, the king of Islam.

Such the dignity of this gun, that in the height heaven. The times determine it as a station at the highest point from its strength and reports of ominous and terrible striking. Earthquakes shook enemy forts.

At the time of the chief of the noble virtues, by whom the kingdom of Bengal was organized, the cloud of advantage, the famous Islam Khan, at whose door prosperity awaited as the lowest mania; When the snake form gun was thus built.

Intended to destroy the king’s enemies. I sought in the path of reflection the year of its completion; Came to the “tope Jahan Kosha” by inspiration.

The ninth plate is in prose and is known as “It is a cannon named Jahan Kosha” under the supervision of Sher Mahomed Jahangirnagar alias Dakha and the clerk of Harballab Das by Jordan Karmakar in the month of Jumadi-us-Sunny.

Major James Rennell, who visited Dhaka in 1764 AD, described in his “Memoirs of Hindustan” a gun measuring 22 feet 10 and a half inches in length and weighing 64814 pounds.

The big cannon which was placed at Sowari Ghat and the other cannon which, together with two big cannonballs, went down into the water at Mughlai Char, were built for the purpose of training the soldiers of Mir Jumla and also for serving as a protection against danger.

These cannons were brought to Dhaka by Mughal Subedar Mir Jumla during his military campaign in Assam. In 1246 AH. Mr. Walters the Magistrate had the remaining cannon, called “Bidi Mariam” at the Sowari Ghat taken away from there and placed at Chawk Bazar.

From Mughal and through Colonial times, Chawk Bazar was the main marketplace/ square of Dhaka. The cannon on the bank of the river known as “Kale Jamjam” was very similar to “Jahan Kosha”.