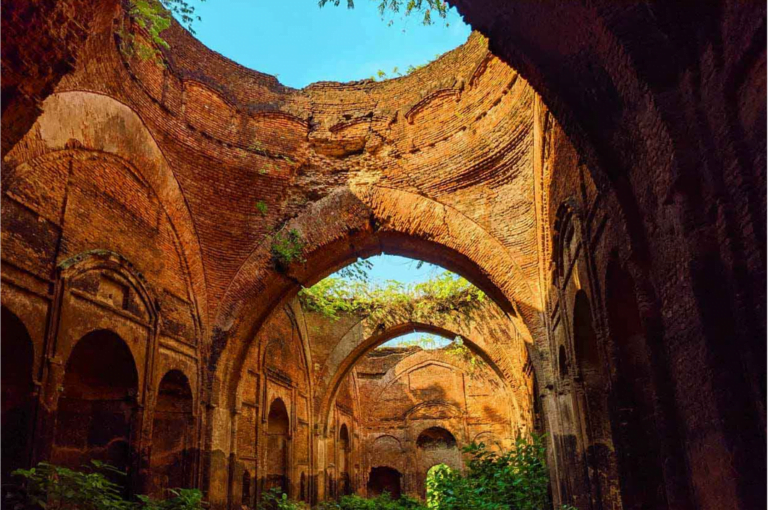 Fauti mosque is one of the uncompleted mosques in West Bengal. And this mosque is around 300 years old. Sarfaraj Khan ordered the worker to complete the whole work within one day.

But unconditionally that work didn’t finish within the time and for that still, Fauti mosque is incomplete.

This mosque has 3 tombs and 4 stairs. These 4 stairs are connected by 4 sites of the mosque.

Now the condition of Fauti mosque is very bad and the whole mosque is covered with jungle.

The old Fauti Mosque is one of the largest mosques in Kumarpur and Murshidabad. It is about 3 miles away from the Grand and famous Hazarduari Palace.

About three-quarters of a mile to the east of the Hzarduari Palace, at Kumrapur, is the Phuti Masjid, reputed to have been built by Sarfaraz Khan in a single night in 1740 AD.

It is one of the largest mosques in the city, 135 feet long and 38 feet wide. It is decorated with five domes, some of which are incomplete.

There are four spiral staircases at the four corners, decorated by four cupolas. The Phuti Masjid is now overground by jungle.

According to another, masons were employed for several months in the construction of the huge mosque.

When Master Roll was called one day, it was found that one person was missing. This mysterious fact was verified for several days when it became so notorious that the mysterious excess workman suddenly disappeared, and the work was left incomplete.

Dutch people had there all the necessary things and live in the Kalkapur. Now there is nothing, only has Dutch cemetery.

In the cemetery area, you can see so many cemeteries. Most of them are destroyed by weather and time.

If you want to know which one is the first and which is the second then you will be unclear. Because they are lost.

According to history, all of the bad things start with British rule. At that time Dutch was one of the first competitors for British business.

This place is under government but there is no improvement. If you go there, you can see the many local people playing and walking into the cemetery area.

And by this line, you can understand the responsibilities that are taken by Government.

Why the Dutch cemetery is famous?

The Dutch cemetery at Fort Kochi is an important legacy of the historical comforts of our colonial past.

The oldest Dutch cemetery in Fort Kochi, India’s oldest European cemetery, is reminiscent of the lives of the Dutch lost in trade and expansion efforts.

Just west of the Residency Cemetery is Kalkapur, where the Dutch factory stood. Bernier mentioned its existence in 1666 and stated that it employed 700 or 800 men.

Joseph Tiffenthaler described the Dutch buildings as spacious and great. Frenchman George Los Vernet, a friend of Warren Hastings, was in the second command here in French 1756 and was very kind to the English after the capture of Cossimbazar and Calcutta by Siraj-ud-Daulah.

Of the 43 monuments from 1721, only the Dutch cemetery remains, the oldest being that of Daniel van der Mueil, who died in 1721.

Only a few tombs are in good condition. Gregory Hercules died in 1739 of the Dutch East India Company. Matthias Arnoldas Brahe, died August 20, 1772.

And, Johanna Petronella Van Sorgen. The Dutch cemetery is located near the Kosimbazar railway station.