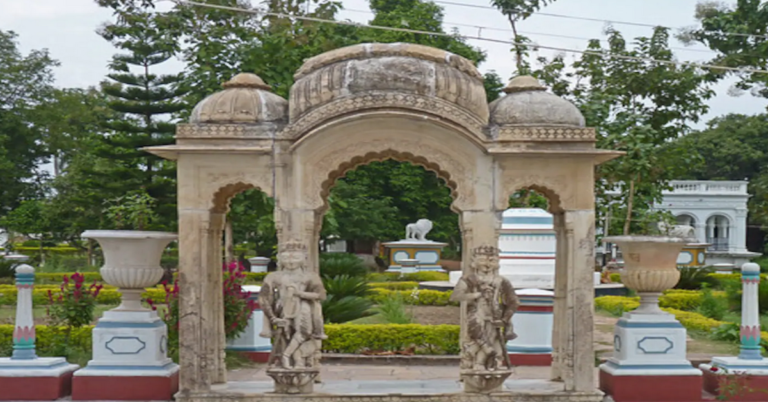 Char Bangla Temple – West Bengal temples always remember the distinctive rice-style roofed structure with beautiful terracotta plaques on the walls and pillars, which was not the case in ancient and medieval times.

Clay has been in constant use from pre-historic times and is considered among the oldest building materials.

To add longevity to objects or buildings made using clay, baked clay, or terracotta, the lightness of nature has been widely used for architectural purposes around the world.

In West Bengal, while baked earthenware has been used regularly since ancient times, fine Char Bangla Temple gained popularity during the Hindu renaissance under the Krishna Bhakti movement, which lasted for three centuries from the 16th century to the 19th century.

West Bengal temples always remember the distinctive rice-style roofed structure with beautiful terracotta plaques on the walls and pillars, which was not the case in ancient and medieval times.

You may also like : Jagat Seth House, who gave loans to #1 East India Company

From the various temples that still remain, it appears that the ancient and medieval eras (mainly the Gupta and Pala-Sen eras) were the earliest elements of stone construction.

Why Char Bangla Temple is famous?

Built by Rani Rani Bhabani of Natore three years after the Battle of Plassey in 1757, the four structures of the Char Bangla Temple are unique and terracotta sculptures are not found anywhere else.

It is a ‘Char Bangla’ temple dedicated to Shiva by a Hindu queen more than 250 years ago.

The use of terracotta in West Bengal began at the beginning of ancient life by making small ornamental fruits used in daily life such as cooking utensils, pitchers, toys, and seals; And was finally converted to be used for temple construction in the modern era of the 15th and 16th centuries.

The stone has been placed as a building material mainly due to the easy availability of soil in a state which has a lot of soil from rivers.

When discussing the Bengal Char Bangla Temple, the first name that automatically comes to mind is the famous Bishnupur.

However, there are many beautiful Char Bangla Temple scattered across the state of West Bengal; Sadly, however, many of them are in a state of disrepair due to their negligence and indifference.

Among the rather unique Char Bangla Temple of this state, four Bengali temples and both Gangeshwar temples are located in Baranagar.

The capital of Rani Bhabani of Natore, Baranagar (1716-1795) fell in Murshidabad district.

Under the queen, Natore was considered the richest of all the zamindars of Bengal at that time, with an annual income of 1.5 crores, a portion of which the queen donated to various charitable causes.

During the relocation of her capital west of the Ganges, Rani Bhabani decided to build 108 Shiva temples at Barengar, with the aim of turning this place into the second Varanasi.

Many of the temples built by the Queen between 1753 and 1760 are now lost due to changes in the course of the Bhagirathi River that bound the structure.

Among the survivors are a cluster of two two-tiered temples known as the Four Bengali Temples and a twin Bengali temple known as the Gangeshwar Temple, both of which are under ASI.

Each temple has three doors, with three Shiva-lingams in the womb. Three of the four temples share a common platform, and the north temple stands apart.

The North Temple of Charbangla is the richest in Char Bangla Temple ornamentation, reflecting various episodes of mythology, stories from Ramayana and Mahabharata, stories from Krishna-Lila, various forms of the mother goddess, and everyday scenes of village life.

A beautiful image of Shiva sitting on a stage is found among the various plaques of the northern temple, while his two devotees Nandi and Bhringi are shown making hookahs and bhangs for him. There is a beautiful temple in the west part.

The former temple is also unique in that it shows stucco works in contrast to the terracotta works seen among others; However, the stucco work was created by the etching method, which is found elsewhere.