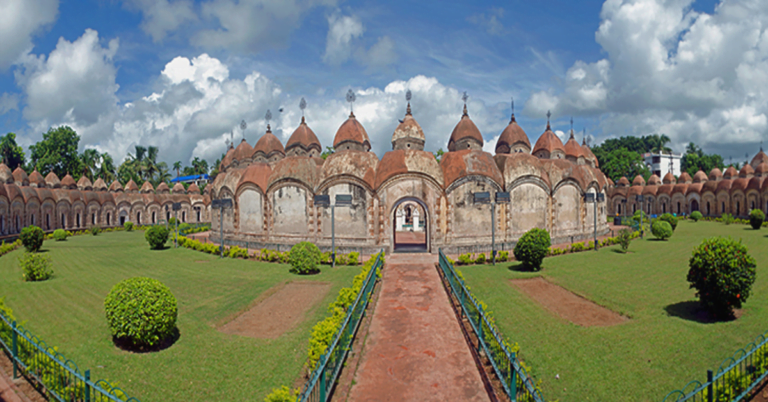 Imagine standing in the middle of the courtyard looking at all the 108 Shiva temples and even seeing the Shivlings present in the sanctum sanctorum.

Well, if you visit the 108 Shiva temples in Kalna, this wonder is possible.

The city is steeped in the fragrance of wildflowers scattered on red clay rocks. The oldest in a series of temples that lends its name to Kalna is seen as the Lalji Temple.

According to Historical Records, this temple was built by Rani Braja Kishori Devi and was opened for prayers in 1739.

The red bricks make up this magnificent temple, which is also decorated with gorgeous terracotta statues.

If you think that only Bishnupur demands terracotta work then you are wrong. The visit to Kalna was truly eye-opening about the rich sculptures of Bengal.

The temple has a distinctive feature, with a roof of 25 separate peaks.

With its magnificent terracotta temples, Ambika Kalna is aptly called “Temple City”. Dedicated to Goddess Kali, the goddess of power, these temples are built in a simple aatchala style.

Nava Kailash or 108 Shiva Temples. But arguably the most interesting place in Kalna is the famous Nava Kailash Temple Complex.

Navi literally means ‘new’, and Kailash is mythologically considered to be the home of Lord Shiva. The temple hall was built in 1809 by Tejchandra, the king of Burdwan.

If you want to explore more, there is no shortage of diversity in terms of architectural splendor. Kalna Rajbari is proud of some magnificent structures, the main Pratapeshwar temple.

The terracotta work on its four walls is very good in terms of details. It was carefully constructed in 1849 by Ramhari Mistry, a skilled craftsman of the time.

The temples are constructed in two circles. One has 74 temples and the other has 34 temples.

The former has white marble and black stone shillings, while the latter has only white marble.

Half of the total Shivlings are white and the rest are black in the outer circle. The Shivlings in the inner circle are white.

The Shivalingas in the outer circle represent the world in which we live, where white symbolizes good deeds and black symbolizes sin.

You may also like: Kiriteswari Temple – The sleeping place of Mahamaya

Only through prayer to Shiva can one see the world full of pure thoughts and deeds. This is symbolized by the inner circle of a temple.

These beads represent beads and their walls depict episodes of Ramayana and Mahabharata and even hunting scenes.

Due to its ingenious planning, all the shillings can be seen from the center of the temple complex.

This is the ASI site of the Archaeological Survey of India. Ambika Kalna was a frontier town in the copper-plated kingdom in the 7th century AD.

Kalna Shiva Temple is known for its historical monuments and 108 Shiva temples in the city.

The name Abikan Kalna was given after the goddess Kal, also known as Maa Ambika. Kalna is known as 108 Shiva Temples for most Hindu religions, also known as Nava Kailash.

The Kalna Shiva Temple was built of white marble and black stone and is built in two circles where the Shivling idol is kept.

From the center of the temple complex, any devotee will be able to see all 108 shillings.

The temple at Pathuria Mahal Ghat is more than 800 years old and is known for worshiping Goddess Ambika.

The walls of the Krishnachandra temple (located in Kalna) are carved with scenes from the epic and are full of terracotta designs.

Mahishmardini Puja is one of the major festivals celebrated in Kalna. People from all over the state gather to celebrate the event which lasts for four days while playing games and enjoying a variety of entertainment.

Saraswati Puja is another festival in Kalna, where Goddess Saraswati is beautifully decorated and the temple is filled with devotees from all over the country.

Not just for the temple, this place is also a photographer’s paradise. Ambika Kalna is a picturesque temple town in Burdwan, home to dazzling terracotta work.

With an impeccable, semi-urban focus, this city attracts thousands of visitors from every day from around the world.

It is not very difficult to find a way to Kalna from anywhere in Bengal.

By Car: If you want to get there by private car or bike, you can get there via Mogra flyover or take the road below the flyover via Saptagram-Tribune and reach Kalna-Katwa Road.

By Train: Kalna is about 80 km from Kolkata city. You can reach here by Hodwah Katwa local train and get off at Ambika-Kalna station. You can then take a Toto (e-rickshaw) from the station to the temple.